Aging Matters illuminates cultural, biological, physiological, emotional, cognitive, economic, and social aspects of aging. A useful guide to a range of disciplines, this title helps readers of all educational backgrounds understand the dynamic interactions between older people and their environments.

Dr. Kevin Y. Kawamoto, a faculty member at the University of Hawaii at Manoa and previously at the University of Washington in Seattle, received his Ph.D. in Communications and M.S.W. (with a specialization in multigenerational social work) from the University of Washington. A former student of Professor Nancy R. Hooyman, he has helped to update her co-authored text Social Gerontology: A Multidisciplinary Perspective and worked on other projects with her over the years. His research interests include issues related to aging and technology; aging and mental health; and active aging. 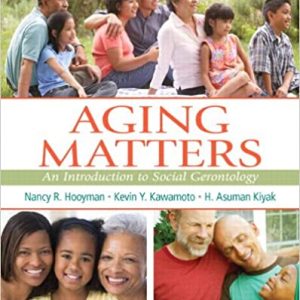